My father was sorting through his mother’s papers last week after she passed away and found a newspaper article from decades ago, titled, “The high cost of Funerals”.

Grandma had circled a number of points that she wished to be enacted for her funeral one day.

No eulogy, no silly poems, no soppy music, no speeches and for the coffin to be closed and to make sure it was ‘nailed down tight’.

Like kids sneaking out after dark, my dad, his brother and sister had the wicked joy of ignoring their mum and doing the complete opposite but this time without fear of retribution. After all the nails were in pretty tightly.

At the funeral, except for the shut coffin, there were touching speeches, four eulogies, a DVD slide show of her life set to music from her teens, some tears and plenty of hilarious recounts of her life.

A pretty remarkable milestone, considering for 100 of those years she was in fine health and had all her faculties. But a bad fall and a break, triggered the end of a full life.

She never drove a car…

She made great Christmas cakes, but was a terrible cook.

I only ever saw her drink sherry and brandy, never champagne.

She loved gardening, and she showed me how to sip nectar from nasturtiums and to put aloe vera on my cuts.

And while she lived for a century sadly, she never went overseas.

She lived through two great wars, the Depression, the GFC  and a myriad of social, political and cultural change.

She never had a mobile phone or used a computer, but I always thought she was ahead of her time; opinionated, forthright and almost too honest; she would have been a great company executive.

She wanted to be a teacher but her family could only afford to educate her to the age of 13 and so she only ever worked in a drapery store, on a cash register, as a cleaner and a housewife.

Doris always claimed her greatest achievement was her family and if the success and health of all of us is testament to that, then she more than reached her goal.

I am the eldest of 9 grand children..She had 3 children and 13 great grandchildren. 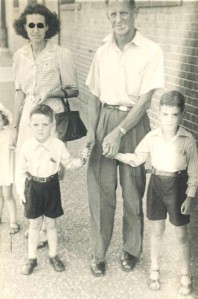 My childhood memories of Grandma are of having sleep overs and lying in bed waiting for a cup of tea.

My sister and I would share a room, and even if we were busting to go to the toilet we wouldn’t get out of bed…

We’d call out to Grandma who was also lying in her bed.

We’d all be propped up on pillows waiting for Poppy to bring us a cup of tea…I don’t remember even liking tea then, it was all about the thrill of drinking in bed.

She never really liked her pets..

She had a cat called “Kitchie” she used to move out of the way with her foot, and affectionately whack it on the head.

My sister once bought her a dog from the animal shelter that had a large goitre-type lump on the side of her neck, which we thought in her older age she might not notice.

She didn’t like the slightly ‘deformed’ dog or its name ….so she renamed it and of course it wouldn’t come or respond.

At some point later she gave it away.

She gave terrible gifts, though I’m sure the depression years contributed to her frugality. She even re-used cling wrap at times.

For Christmas, my cousins were once given men’s Y front undies. They were both girls.

She would reuse the same Christmas cards we’d given her the year before, but she’d cut the back off and write on the picture side.

She left $1.50 to my younger sister in her will. The only grand child or great grand child to be bequeathed. It was in a pink envelope and the dollar was an old fashioned note.

My sister has no clue if it means anything.

She would tell anybody and everybody what she thought of their appearance. She was particularly focussed on their size.

Whether we had or not,  we had  always ‘put on weight’ or had a terrible hairdo.

She even offered one of their friends a laxative,  because she looked like she needed one.

She expressed to one of  her nurses her thoughts. “You’re a little bit fat aren’t you?”

But then she said, “Oh I’m sorry that’s politically incorrect isn’t it?

She also thought the food was so bad at the nursing home she was in for the last 3 years of her life, that she asked an orderly for a gun…

so she could shoot the cook.

and she loved criticing the newsreaders even more..

She was happy I became a journalist, but was disappointed I didn’t stay with the ABC.

She’d always say to me, “Thank god you are on television or I’d never see you” and wanted me to tell Heather Foord (the channel 9 newsreader at the time) to ‘change her terrible hairstyle’.

I think I’ve inherited a few of her traits.

She loved reading … I got that from her..

And proving how comforting she found order,  she passed away on the 6th April. Exactly 100 and a half  years to the day after her birth on the 6th of October, 1911. She would have liked that neat number.

She had beautiful olive skin…her cheeks and jowls were wrinkle free and line less even at 100…..I hope I inherit that..

She still had very dark, lustrous hair with no greys well into her 80’s.

She was stubborn and independent and always right . That DNA must be potent, there’s quite a few people in our family who can claim those characteristics..

She had an opinion on everything and would continue to argue that she was right even when we went to the trouble of proving her wrong.

I know she offended some people by being so forthright, but I admired her for it.

And I think regardless that’s what we’ll all remember the most.

She was a strong, stern, sensible woman who always did it her way regardless of the challenges and the outcomes.

And she lived like that for an entire century…that’s pretty amazing..!!

Well done Grandma, goodbye and wherever you are I’m sure you’ll tell them what you think.