Sometimes when you travel, how a day unravels is not the way you planned. Often the unexpected is so much better.

This is a story about how a spontaneous stop at a pharmacy led to:

We left our old town apartment with one goal; to check out the portside statue and square of Lisbon’s Praca do Comercio before the hordes of summer tourists arrived.

Ticking off that sight with a photograph we headed for breakfast to sit and map the rest of the day exploring Portugese landmarks and monuments.

But a brief stop at a pharmacy to buy strapping tape for a foot injury forked a day of tourism into an exceptional travel experience.

END_OF_DOCUMENT_TOKEN_TO_BE_REPLACED

How not to die in the Greek Islands.

You’d think sailing the Greek Islands would be nothing but picturesque and peacefulness.

But we were attacked FOUR times and almost died on a morning walk around the stunningly beautiful, yet not-too-touristy bay of Palionisos on the Dodecanese Greek Island of Kalymnos in the Agean Sea. 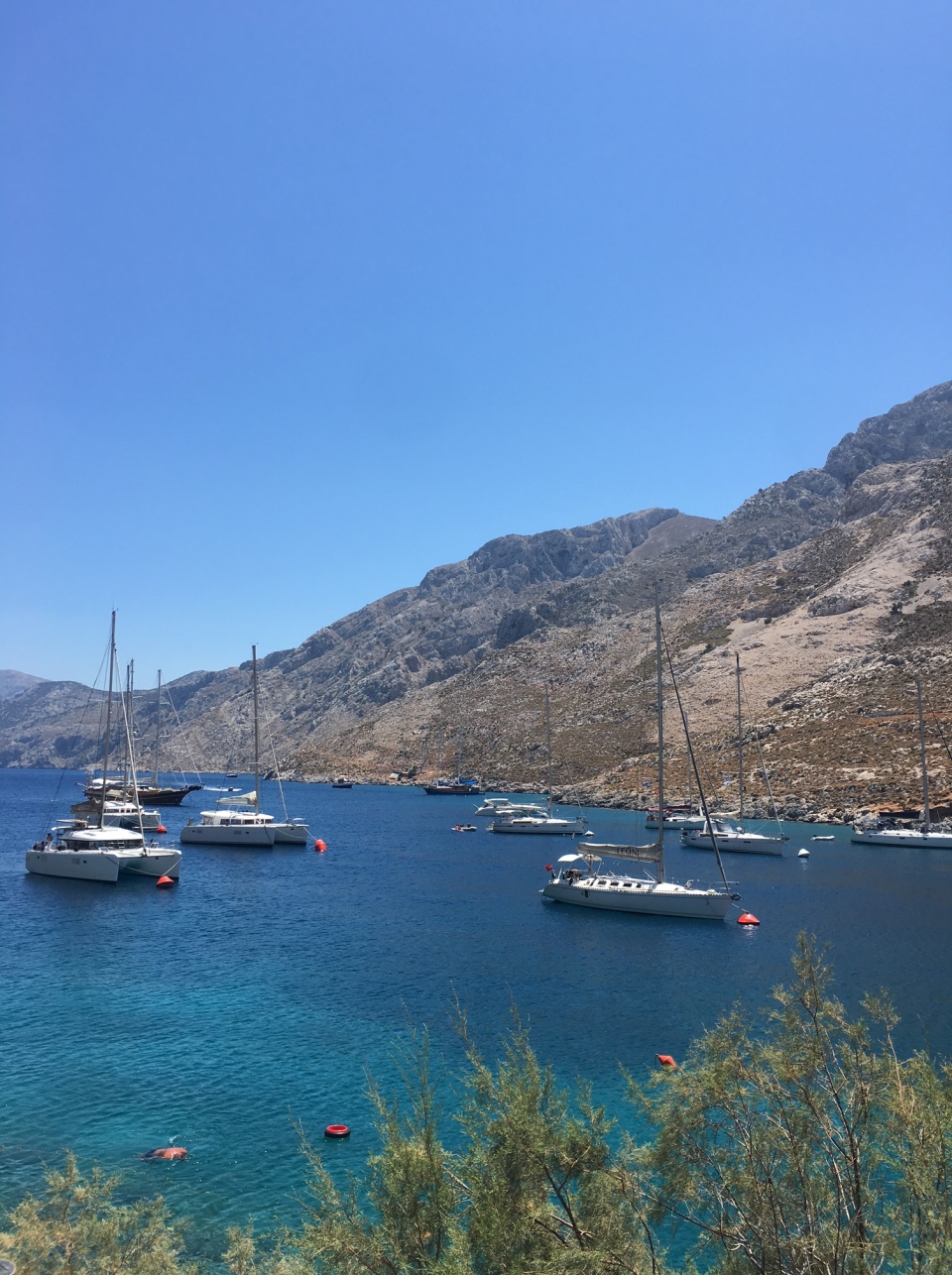 On a week long sailing trip, our catamaran skipper Kostas had been proudly telling us he would be taking us to places not targeted by tourists.

So the day before the attacks we spent an incredible day swimming, eating and drinking alongside the Kalymnos locals.

END_OF_DOCUMENT_TOKEN_TO_BE_REPLACED

You only need a day to do Brussels

When you google, “What to do in Brussels?” so many suggestions pop up in lists or top 10’s it would seem you’d need a couple of days to tick off just a few of the tourist spots and foodie recommendations. 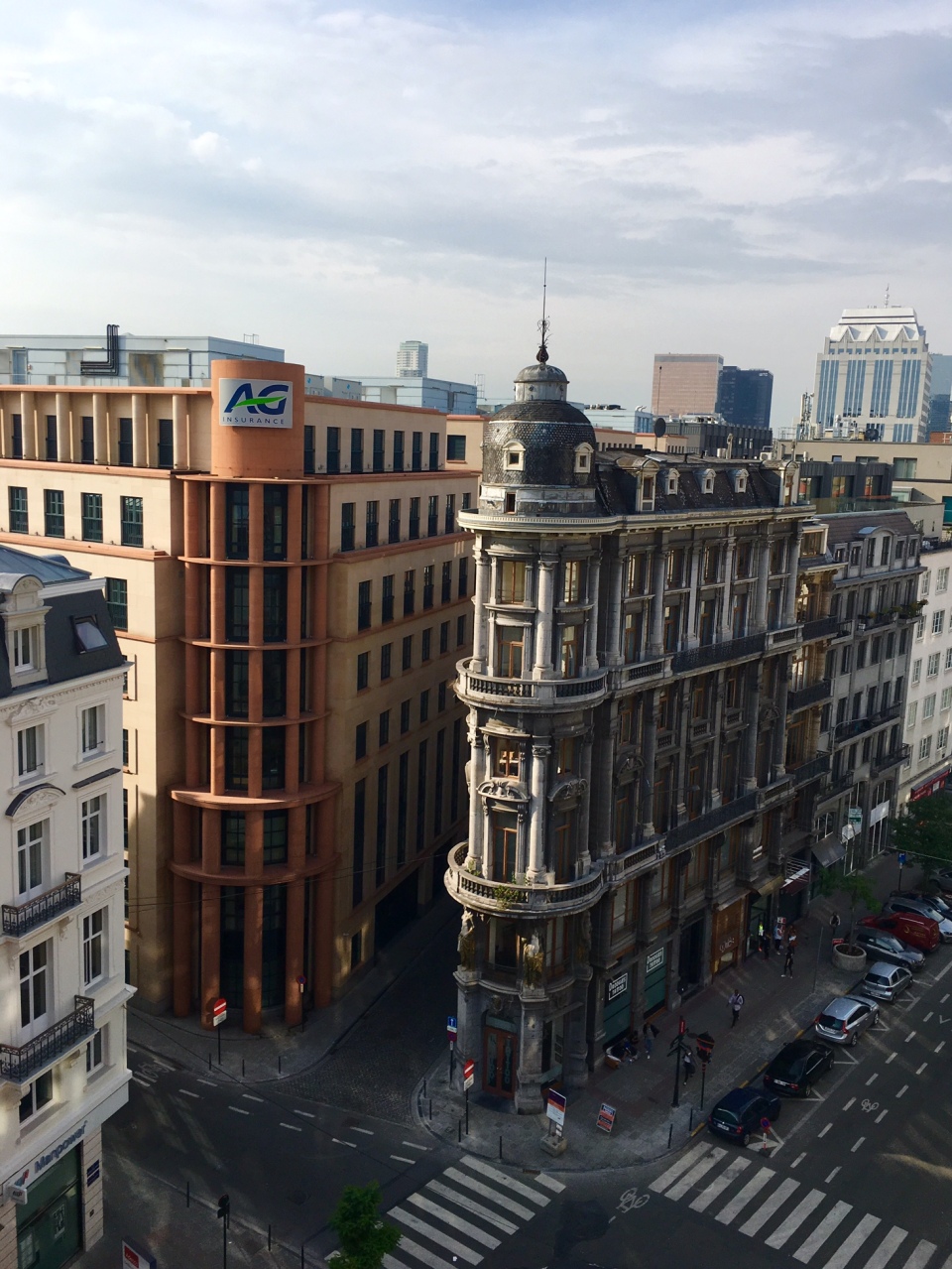 I reckon the best use of the time  is to arrive later in the day so you can wander the streets, enjoy a great Belgian meal and a good sleep.

Then refreshed, you’ll knock everything over before heading to your next travel destination, especially if you really want the extra time there.

5pm: Arrived at the hotel, checked in and found to our delight we had a balcony. (Although we could only access it by climbing out of the window, which of course we did).

5.30pm: Went across the road from the hotel and purchased takeaway tequila beer and climbed out to the balcony to take in the city from above.

6.30pm: Wandered the Brussels streets, many of which are closed to car traffic.

7.45pm: Found the restaurant recommended by our hotel and now highly recommended by us. There was a waitlist so we stood at the bar and chatted to others also waiting to be seated.

8.30pm: Seated and about to be satisfied. One of the best meals we had enjoyed in a month.

11.00pm Home to hotel and bed. (Of course nightowls and nightcaps are catered for in this city).

9.15am Checked out left our bags with concierge. 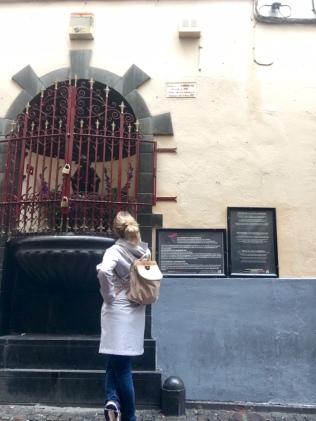 1.00pm: Explored the Atomium (marketed as the symbol of Brussels).

3.15pm Caught the train to the European Quarter.

4.00pm Explored Cinquatenaire, Royal Army and Military Museum and Autoworld (NB did not buy tickets but went inside to the coffee shop and was able to see quite a lot)

5.30pm: Decided to walk 5km back to our hotel to see the Royal Palace of Brussels, Pierre Marcolini Chocolates. 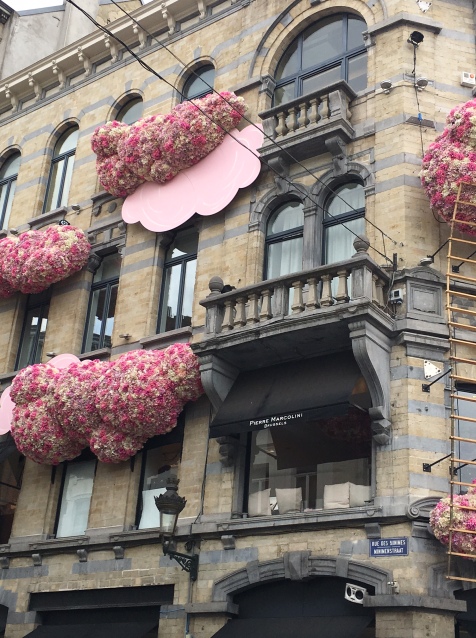 7.30pm Train back to airport 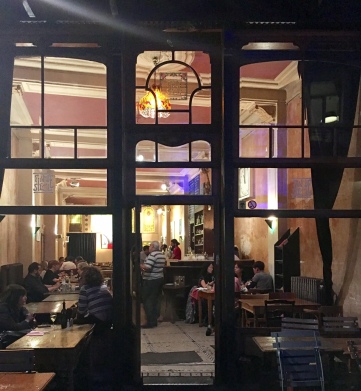 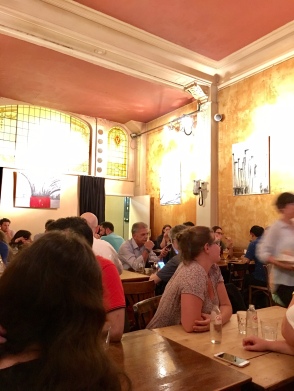 It’s well known locally as a beer and meat restaurant but there is always a vegetarian option with menu scrawled on a chalk board above the bar. The prices are very reasonable around 14-18E

I had the vegan moussaka and my husband went authentic with the beef cooked in Begian beer (a la Chimay) but the hit was dessert, the Chef’s Citron special.

You can get waffles anywhere, but they are normally already cooked and cold and awaiitng your choice of topping. Juice Land, owned by a Belgian born Chinese guy makes them to order while you watch, so they are hot and fresh and fabulous.

The Atomium- as its name suggests it appears like a giant atom made of aluminium.

Just like the Eiffel Tower it was built for a World Fair, that of 1958 and it too was supposed to be dismantled after the fair but remains today as the country’s icon.

While it is certainly interesting to see, photograph and climb the tubes and balls and it is definitely worth a visit, I’d argue it isn’t the breathtaking beauty and iconic symbol of its Paris contemporary. For a start it’s not located in the heart of the city and takes an effort to get there. Although you can also visit the Mini-Europe attraction next door if that interests you. ( It didn’t for us, we’d rather the real Europe tour). 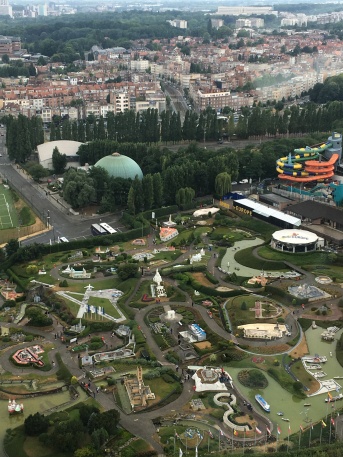 Museums- If the chocolate museum or the beer tasting tour or the comic book tour or the Military museum, or any of the other tours or museums are what interests you you may need another day in Brussels.

We visited almost all as well as the main attractions- the little boy and girl Pis’ which are free and mapped our own chocolate and beer tours.

The closest metro station is De Brouckere so if you feel comfortable navigating the rail networks it’s really simple, central and you’ll have more time to spend on beers, chocolate and waffles.

Hits and misses of B & B’s in England.

No matter when or where you travel choosing the right accommodation to suit the location and your budget is a balancing act.

So, on a major three-month holiday, we chose a just-as-long variety of accommodation venues.

In some locations and countries, we indulged, opting for amazing hotels with views over the sea and in some spots, we tried to spend a lot less.

For our eight-day road trip around England covering most of the west of the country we decided bed and breakfast stops would be best.

END_OF_DOCUMENT_TOKEN_TO_BE_REPLACED

If the Chateau de Versailles isn’t on your must-do list of Paris, then you need to take a good, hard look at yourself in the hall of mirrors and royally re-assess.

END_OF_DOCUMENT_TOKEN_TO_BE_REPLACED

Canal Saint Martin- why and where you should go.

Today started as it has now for the past ten days in Paris.

A long black and a short chat.

I don’t have a plaque at the bar like Tom, the best customer at my local café, Au Coeur du Marais, but as I am the only Aussie and a slightly semi-regular, the owner Bastien knows my order and is happy to tolerate my french-in-pratique. 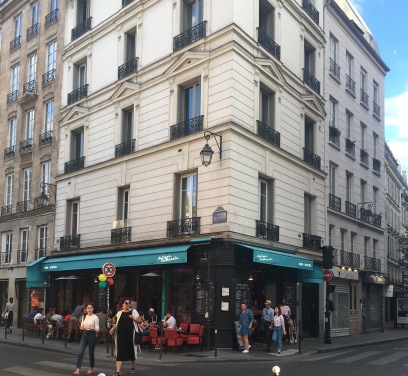 Other than great coffee Bastien is also handy at serving up some Parisian travel tips now that I have proven my caffeine loyalty.

So that fair-familiarity is how we (my hubby and I) ended up spending one of the best Sundays possible in Paris; away from the tourist traps and crowds, strolling the other waterways of the city, eating disco soup, amazing Vietnamese food and at the same time supporting the recovery of the country which has been hit hard by terrorism.

Let me explain those extraordinary links.

END_OF_DOCUMENT_TOKEN_TO_BE_REPLACED

Why Chantilly is a sure bet when visiting Paris.

When you visit Paris there are so many wonders to enjoy and so many sights to inspire that side trips out of the city are not usually on the agenda.

But if you have been to Paris before or if you have an extended amount of time and a race meeting is scheduled, a day at the races in Chantilly is an absolute must-add to that agenda.

We lucked out with a double; one of the two most prestigious race meets on the France Galop calendar, the Prix de Diane Longines, and a perfect blue sky, summer day.

Arriving at the race course, one of the oldest in France, the view was to die for. It looked like a fairytale carnival.

END_OF_DOCUMENT_TOKEN_TO_BE_REPLACED

If our daughter wasn’t living in Liverpool on a six-month working holiday the city wouldn’t have been a must-stop-spot on our English itinerary.

But as it’s still the home of Beatlemania I defy anyone not to enjoy a trip down memory lane, which is in fact not called Penny, rather Mathew St.

That’s where you’ll find Lennon’s Bar, Sgt. Pepper’s bistro and a host of other establishments tourist trading off the famous fab four.

There is however a closer to authentic hot spot for Beatles lovers and you really are transported back to Yesterday.

END_OF_DOCUMENT_TOKEN_TO_BE_REPLACED

What to pack for a three month holiday!

A bucket list travel experience that has been 10 years in the planning.

Actually, I didn’t really start planning until two years ago, but I thought of it 10 years ago.

So now after eight years of thinking and two years of booking, saving, paying off and actual real-time planning it’s almost departure time.

So the big dilemma.

My empty suitcase on the left.

END_OF_DOCUMENT_TOKEN_TO_BE_REPLACED

When and where to plan your next ski trip in Japan? 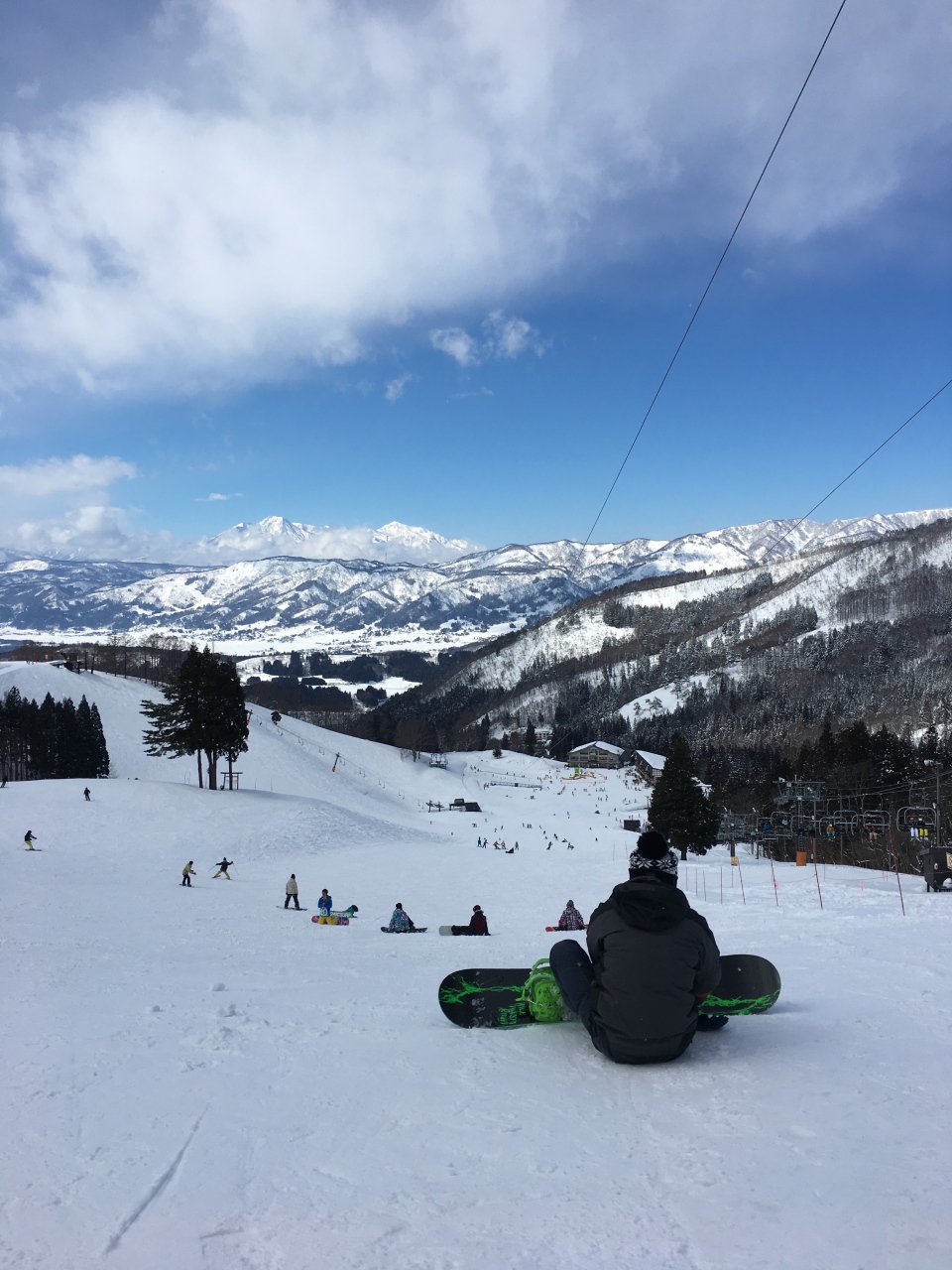 Looking forward to a ski holiday is almost as good as enjoying a ski holiday so the best time to plan and book is just as the snow season you intend to visit comes to an end.

So if you are considering a Japanese ski trip that time is now.

2017 was a dumper of a year in the land of the rising sun and for the second year in a row we took a short ski break to what is arguably the best of the bunch- Nozawa Onsen.