Baby steps to letting my baby girl grow up!

With five exclamation marks, I suggest she’s quite excited about the looming end of her schooling years, and she did get quite a lot of thumbs up from her friends.

It means another milestone passed on the ever-quickening march to my baby girl saluting the end of childhood and becoming a grown up- moving on, moving out and maybe even moving away.

I believe it’s so much more poignant because I know these are the last moments.

I first felt this lump in my throat of time being swallowed when I watched her play her last game of waterpolo for her school earlier in the year.

I recognised as she put on her bathing cap and jumped in the pool, that this would be her final game. She has chosen to follow her dream in basketball and other sporting pursuits have been falling by the court side.

I had the same melancholy thoughts when:

-she started her final year of school

-she washed and hung up the afore-mentioned, never-to-be-worn-again winter uniform 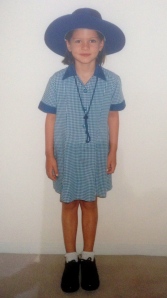 It doesn’t seem that long ago that I brushed her short brown hair, helped her tie her shoe laces ( two bows and twist), packed a lunchbox of vegemite sandwiches, plonked an over-sized hat on her head and waved good bye to that adorable  little five year old on her first day at school.

She was so excited to be a ‘big girl’ that neither of us had first day tears. Not like the ones that threaten to spill over every time I think of these last few weeks encroaching ever closer.

Back then, she raced off and happily started school and began the rush to finish it.

Since that day, the milestones have ticked over and like the chocolate devouring the lollies before all the jelly has been crushed (ok I’m a little obsessed with candy crush- but hey I don’t have to pack lunchboxes or tie shoelaces anymore so I have a tiny bit more time) the ticking is getting faster and louder.

-breaking her arm riding a skateboard to school

-the first day at basketball

-the same second boyfriend back for another try

-the parties where pass the parcel was the big drawcard

-on the flip-side, the growing love of history

-the growing responsibility about her marks and her life after school

-flipping again, getting detention almost every week for not wearing her hat to school

-getting pocket-money deducted for not cleaning her room

The smiles, the tears, the injuries, the triumphs, the jokes and the joy.

I can’t wait to see what choices she’ll make, what dreams she’ll discard or decide to follow, what adventures she’ll embark on, where her sport might take her, what friends she’ll keep or who she’ll meet next.

So don’t get me wrong,  I really am five exclamation marks and more excited for her future.

The tears are just pride.

← Lessons in fashion from mbff
Why this is the best restaurant in Italy! →

One Comment on “Baby steps to letting my baby girl grow up!”