I am so excited to have scored a new position with the Mission Qld Firebirds and Queensland Netball.

Contrary to what you may think it’s not WA.(wing attack)

I missed the trials to play alongside Laura Geitz, but luckily made the grade with my other skills and am thrilled to be joining the team as the Marketing and Communications Manager.

I am stepping off the catwalk and running onto the court, so to speak.

Reluctantly relinquishing the glamourous, sophisticated and high-style role as Media Manager of the Mercedes-Benz Fashion Festival and returning to my first love- the uniform, sweaty and high-speed world of sport.

I started my career as a sports reporter for the ABC and worked for Wide World of Sports and The Footy show. I’ve covered Olympic Games and interviewed sporting greats from Greg Norman and Michael Phelps to Pat Rafter and Lauren Jackson.

But it’s clear from photos that fashion and netball, at least in my case,  have always been closely aligned. 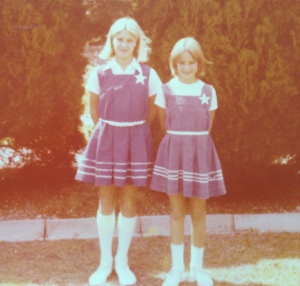 From the days of the pleated tunic with the cord plaited belt, high socks (which are back in some countries I’m sure) and in-vogue Dunlop Volleys,

to the well-coiffed hair styles delicately complementing the over-sized bibs. 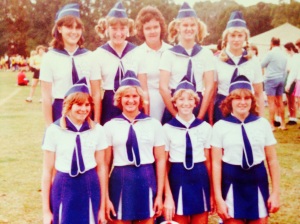 From the march-past parade garments where my team’s exclusively designed outfit of sailor hats and scarves won us runway applause every time,

to even more Dunlops paired with classy, high-collared blouse and trim to pick up the   radiant colour of the maroon wrap-around skirt.

God those days were fantastic, but it’s all about looking forward so I will have to pack away my glory-day memories.

Memories that included at the age of 10 and playing for the Cannon Hill Stars, scoffing oranges with Vicki Wilson on the bus to our game so consequently had none left for half-time. (Yes we caught buses, that carried just us stars.)

Umpiring games without a whistle. I used to make an “eeekkk” sound to simulate a referring call. (Not very effective)

My so-called team mates hiding my stuffed toy mascot in the freezer or strapping it to a high-speed ceiling fan.

Getting busted at a National Titles in Darwin sneaking out. Not to visit nightclubs or bars or boys but to the corner shop to stock up on family-sized block of chocolate so we could play the chocolate game. You know the one where you have a pile a clothing and two dice if you roll a double six you have to put on the clothes and eat the chocolate one square at a time with a knife and fork until someone else rolls  a double six.

It has been some (cough.. many) years since I’ve played the game competitively, without counting the 6 game season as a member of the pink caviars (yes my marketing flair on the back of the famous racehorse) in a recent University of Queensland competition, and the sport and uniforms have changed considerably.

There are sponsors and state leagues and television coverage and high-performance coaching and nutritionists and paid staff.

So while the game today is professional and polished with huge numbers of participants, high-calibre administrators, players who are incredibly athletic, enormously talented and marketable, what has remained stuck in the days of pleated tunics and Dunlop Volleys is the vast amount of fun and the friendships that are formed playing netball.

That has and should never go out of style.

One of my jobs is to make netball, like a designer brand, even more fashionable to those who love it and more-so to those who haven’t tried it on.