Like so many people I cannot wait for the Games to begin.

It seems like only four years ago I was there, brandishing my valued infinity pass which allowed me  access to…well everywhere.

In the Birdcage mid-track 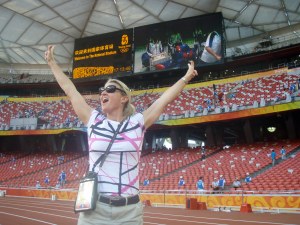 aka Usain Bolt (see pic), courtside at the US Dreamteam versus Boomers game, Federerside at the tennis, poolside at the Phelps eight medal haul, podiumside at the cycling…ahhh the glory days.

But in the theme of inspirational sporting quotes such as :

“The most important thing in the Olympic Games is not winning but taking part; the essential thing in life is not conquering but fighting well.”
Pierre de Coubertin (founder of modern Olympic Games)

… it’s not really that far removed from my own amazing Olympic village at home…the competitors all take part and they all fight!.

The five athletes/daughters who have competed many times with each other in the Olympic sports favoured by the greek gods (or at least some people from Greece)of wresting, judo and weightlifting.

The only slight difference of course with the sports events such as weightlifting is the flip-side gold medal competition to see who lifts (ie holds or carries) the least.

Then there are the many amazing sports that comprise the modern Olympic games, all harking back to the original concept of honour and unity.

In my village we have almost every Olympic sport and activity covered, including flag bearing where unlike our Aussie team every games a female carries it and  torch-carrying aka passing the very hot hair straightener from hand to hand.

The girls have all swum; experienced the nerves of being up there on the blocks waiting for the starters gun and anticipating their personal best times.

All five , like many Olympic counterparts couldn’t wait to quit swimming, put on a little weight, ponder a comeback or tweet pictures of themselves with nerf guns.

Three are still playing waterpolo and like the girls who have gone to London to represent the country  aren’t known in the wider community, let alone outside the waterpolo fraternity.

Three of the girls play basketball…and they too only travel economy.

Four are currently involved in rowing. The three youngest in coxed, quad crews and one of whom has been chosen to compete this winter as an individual sculler (yes a few would recognize that term but it doesn’t involve beer) and one is coaching.

Like high-level rowing, there’s been a bit of controversy in the family over the years with sister coaching sister and daughter pulling out then returning and so there could be comparisons to those rowers who like to lay down and have personality issues. Unfortunately for my girls though, there’s no one to appeal to so the controversy largely just gets thrashed out at a quick meal-time judiciary, and similarly the higher body makes the ultimate uncompromising determination.

One has tried athletics, and while she is definitely talented it does seem that she runs her fastest when having to meet me and pretend she wasn’t with the boyfriend.

It goes without explanation with five girls, three of whom are step-children there have been numerous hurdles.

Another daughter has tried tennis, but didn’t like wearing white, or a skirt.

I also have seen them all at various times practicing their synchronized swimming in the backyard, and have video footage (which I won’t share) so as to keep with the theme of no one ever having watched that sport outside of the games.

One has tried shooting but thank god at her age she’s not married and would prefer to share a room with girlfriends.

Ping pong..all five have played …they should be in London.

One gave a nod to gymnastics by virtue of wearing a leotard but then switched to competitive aerobics. She probably should have tied harder at ping pong at least that’s an olympic sport.

I’m sure all of them could march around a stadium and hold a flag and wave at the same time. After all they can watch YouTube, text, listen to an iPod and claim to be able to do their homework simultaneously.

They know all the words to the nathional anthem and even the definition of girt .

And of course there’s the Olympic symbolics, that should be given more value in my village.

This the most important.

There are 5 rings to the Olympic emblem-and  I have 5 daughters.

BUT I  only have 2 rings.  Therefore with a mind to fairness and team unity ( very sportsmanship-like) I must insist that my husband invest in 3 more rings of equal value and preferably gold. Of course like the athletes who finish second and third ,  I can be proud of silver (maybe not bronze) if that’s the best he can do on the day.

The argument could be made that in keeping with Pierre de Coubertin’s creed of fighting as an essential part of life,  I could let the girls bash it out for the 2 rings I have once I’m gone.

I’ve never been a big fan of the ” everyone gets a participation ribbon”  at the school sports day, but in this case I think fairness is favourable.

But when it’s all said and done whether the girls ever get to an Olympic Games to watch, work or even compete, like the parents of the Aussie athletes who are in London for real competition , I’m just as proud of their achievements…The ‘taking part’ and ‘fighting well’ bits anyway.

← For the anti-fifty shades fan…
I’m more fashionable than I thought! →