The Mother of all Travel

DON’T leave your mother’s at home….take them with you…..just be prepared!
“You’re brave, I’d never do that!”
By far, the most often-uttered reply when informing friends, I had just returned from a holiday to Vietnam with my 66 year old mother(M ) and my 72 year old mother-in-law. (M)
Before heading off I never doubted spending time on an exotic holiday with 2 wonderful women, but let’s just say some degree of courage is required. 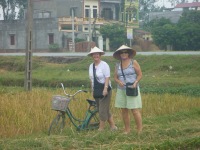 My mothers-daughter 10 day Vietnamese adventure included
*a cyclo tour of Hanoi
*a junk boat cruise of Halong Bay
* a cooking class in Hoi-An and
*the Cu chi war tunnels in Ho Chi Minh City.
Although the haggle-style market shopping was similar in each of these eastern stops, the cultural and personal experiences were significantly more diverse.
M and M found the French-inspired Hanoi, with its suicidal road-rules a shock, but loved the vibrancy.
They relaxed in and relished the more western and cleaner city-centre of Ho chi Minh, taking in lunch at the Saigon Intercontinental just 5 minutes after standing on the street bartering for a wallet.

Both M and M considered Hoi-An their least favourite, in contrast to my view that it was the pick of the destinations. I loved the still-unspoilt streets lined with tailors and shoe-makers, the colours and smells of the riverside stalls and the food was bursting with flavour.
And all three of us were in amazed agreement at the spectacular beauty and serenity of the World Heritage listed Halong Bay, dotted with some 3000 limestone island outcrops.
It was a busy, bustling broad overview of an expanding country that we all enjoyed immensely together.
But here’s the heads up …
Instead of exploring a new country with your parent, in so, so many ways it actually IS like travelling with kids….
For such a boom in niche getaways (travel agents report there is a trend to this type of maternal travel) …you’d think there’d be the equivalent in advice and information, after all it is a form of family holiday!
At the other end of the age spectrum there’s an abundance…..With 5 daughters I have gathered all the tips on how to keep children occupied on flights, read the lists of child-friendly resorts and restaurants, best family deals, and seen even entire publications dedicated to this genre of family travel.
But frankly, after surprising M and M with the trip to Vietnam, it didn’t cross my mind I’d need any forewarning.
I didn’t look up any brochures or websites or try to source any articles on how to survive and make the most of a vacation with my mums. I have fabulous relationships with them, they are both bright, vibrant, fit and entertaining women….but heed my alert, once you get them on a plane or a bus or in a train or a boat, in fact anywhere outside the country, those children-friendly-family holiday information guides could  come in handy.
I had to hold their hands when we crossed the street…..  (we walked everywhere and the lack of road rules in all cities had them both petrified to explore the opposite side of the road without me.)
They lost their ability to calculate.  (20000 dong = approx $1 US/almost Aust dollar, therefore $100000 dong = $5 and so on)….Not once could they work out how much an item cost or how much they were spending, so “how much is this?” became their catch-cry, similar to “are we there yet?” in frequency and irritability.

Both were easily-influenced, and I had to arm them with stranger danger warnings as they became daily victims of persistent street-side sellers….Beauty technicians turned a simple $5   pedicure into a $30 make-over and they bought more wallets and scarves  than they could ever use.
They forgot where they put their tickets, passport, money anything of mild importance and countered this by buying more even handbags and wallets : thus the cycle of forgetting what they put where became a comedic/wrist-slashing  highlight.
Then there are the physical considerations…afternoon naps, medication reminders and fatigue. ( HINT: Importantly you must check your travel insurance fine-print before booking, as some pre-existing  conditions void the insurance.)
So sure there are some similar child-like frustrations….but on the flip side, unlike kids they don’t throw tantrums and there were no tears, they had way more pocket money, could buy their own handbags  and without fear of kidnapping or prosecution, you can leave them alone in  hotel room while you pop out for a drink.
And above all in my experience it was one of the most memorable, hilarious and rewarding trips I may ever take… Even more so for the joy of witnessing just how much M&M enjoyed and appreciated it.
With 5 daughters, hopefully the odds of me taking such a trip in the future is significantly improved, especially as I can give them all the advice they need to take a parent on holiday.